My father has a fruit guy he’s been going to for years. As a child I’d wander after my father, through the piles of longan and lychee, Thai mangoes and starfruit, and the fruit guy would say “Girl, you try this one”. My father calls him “Tiger Brother” in a dialect, I don’t know which. On Hari Raya, my father orders baskets of fruit from him, and loads up the car with durian, guava, oranges, mangoes, to be cut and served to my very big extended family after hours of visiting.

When I lived in Egypt, I had my own fruit man for the first time. He was a little, dark old man in a fruit store on the corner. He always seemed very amused at having three foreign girls with broken Arabic come to his shop. He had a kid helping him, sometimes, maybe a nephew, or a grandson. The fruits in Egypt are delicious. He’d let us munch on a banana each for free, and sell us whatever was in season. Gorgeous, perfect persimmons that he assured us weren’t from Occupied Palestine, figs that looked like hearts when you cut them in half that were so sweet they tasted like they’d been sugared, watermelons that hopefully hadn’t been grown in Nile water. He’d teach us the names of the fruits in Arabic, and test us on them the next time we came by. I’d recognised the name for figs from the Quran, and he approved. The entire area of Mohandiseen was apparently wrecked by the first revolution. He was an old man, and the wheels of revolution are still turning. I pray that he is safe.

Now, my fruit man is a fruit family. Thursdays they are at the market near the Prefectural Offices. The father smokes and naps at the side of the stall after all the office workers have gone back into their offices after lunch. He gives me free tomatoes sometimes.  The son never gives me a discount, but he tells me what’s good today. The mother never comes on Thursdays. She comes on Sundays at the Sunday market near Kochi castle, and talks to me. One week I came with a friend, the next week she asked me what happened to my friend. I generally come alone, I think she pities me for that. She checks to see if  I know how to eat the fruit. Loquat – no, yamamomo – not really, peaches – yes. I think she calculates the prices wrongly, sometimes, but I have to translate the prices to do it, so I don’t really bother to check. It’s worth it, really. Now cherries have started to come into season, and the peaches are turning perfectly red at their tips, the last of the loquats and yamamomos are at the corner of the stall, and we are in summer.

Wednesday is very sorry she’s been out of it for a while. She is writing a post now just for you.

This article has haunted me since I’ve read it. It’s terrifying.

How to destroy the future | Noam Chomsky | Comment is free | guardian.co.uk.

This was why my university banned all Nestle products on campus, Nestle having infamously promoted baby milk formula in Africa, causing infant mortality rates to RISE.

The 10 best words the internet has given English | Books | guardian.co.uk. 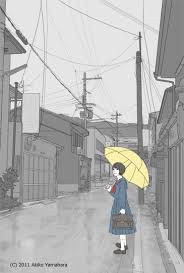 I spent the weekend travelling to old places and new. I didn’t tell many people I was going, and as a result spent three days not speaking to anyone other than shop assistants. I went to this which was amazing. The picture above is from here, I bought postcards by the artist from the ARTs*LABO stall at the market.

It was good. I spent a lot of time by Tokyo Bay, watching ships depart and wondering why most of them are named something- Maru. I went to Meiji Shrine, where I was too early for the irises, then went back to the humid embrace of the rainy season, which is 9 days too early.

I am trying to forgive. I hold on to grudges unremembered by anyone else, and honestly, I think if I told someone what exactly I remember, they probably would find it quite horrifying. I find it quite horrifying. So I’m trying to forgive these little things I remember, to make space for new things. Memory is difficult, and talking about it is hard, because you don’t know how much people remember, and how much of yourself you will lay bare. I do genuinely wonder if my memories are my own, and how many of my stories in my head are just stories, half remembered conversations I’ve stiched together from different people, places I’ve imagined that I may not have been. It’s terrifying, this doubt. I envy those people who’ve had friends who’ve been with them ever since they can remember. I suppose that’s pretty much like a communal memory, for some things.

So I am trying to forgive, everyone, really, that I can, and slowly dissolve these unyielding pinpricks of time. For my own sake, and no one else’s. Since no one remembers, it is mine to let go.

I am travelling this weekend, in part to clear my head. It is, probably, very privileged of me.

I dislike those recent memes “Why you should date a girl/boy who…” It sounds, really, like a hard-sell by girls of themselves. Don’t sell yourselves, ladies. Seriously, if you have to tell people why they should date you, I don’t think you should be dating them. And, also, if you are defined by your love of travel, of books, of all these pretty things, then clearly you have the time and money to actually do these things. What about the girls who don’t? Are you saying don’t date them? Because they are not you? What is this stupidity? Date whoever you want! Let boys date whoever they want!

I am also rewatching Totoro. I didn’t realise this, but makkurokurosuke aren’t actual youkai. They were made up by Studio Ghibli.

This is a brilliant documentary. In part this fascinates me because these are really kids who grew up in bad circumstances, in the poor banlieues of Paris who decided/ created a movement based around beauty and strength. I realise, now, that many of the people I’ve grown up with actually, deeply believe that poor people are somehow lesser than they are. They believe that education, wealth and intelligence is the right of those who can, and those who cannot, didn’t gain enough merit in order to deserve it. This bothers me. This is perhaps why I’ve stopped talking, really, about things that matter to me to a lot of people who used to matter to me, and often still do. It’s hard enough for me to talk about this to myself, but to talk about this to people who won’t see it the same way terrifies me beyond words.

Anyway, I do, really, recommend this:

It has been 65 years of dispossession. Thousands of Palestinians in Israel march to return | The Electronic Intifada

Archbishop Desmond Tutu, who fought apartheid in South Africa, on apartheid and the power of disinvestment in Occupied Palestine:

Tutu: Issue is the same in Palestine as it was in South Africa, ‘equality’ | Mondoweiss.

I believe in disinvestment and the BDS movement. This is why I don’t buy Marks & Spencers, I don’t go to Starbucks, I don’t buy anything that’s either made in Israel or is from Israel. I don’t really tell people about this, because people think it’s a “Muslim thing” (that Bethlehem and Jerusalem are occupied doesn’t seem to occur to people… Seriously. WHAT WOULD JESUS DO? Ignoring those who are being oppressed doesn’t seem to be it!), people think it’s pathetic/ useless, people just generally think it’s weird. But really, I am much more answerable to God than anyone else, and even if I can’t do much other than stop buying those tasty Israeli persimmons and stop drinking nice cold coffees in those pretty tumblers, at least I am aware, and I am doing something. At least I know enough to decide how I want to spend my money matters, because it matters to me. What I consume, what I buy, is a decision that shapes me, and it’s in the little things that I don’t let slip by that make me more aware, more concerned of things that are happening to people other than me.

“To those who wrongly accuse you of unfairness or harm done to them by this call for divestment, I suggest, with humility, that the harm suffered from being confronted with opinions that challenge one’s own pales in comparison to the harm done by living a life under occupation and daily denial of basic rights and dignity. It is not with rancor that we criticize the Israeli government, but with hope, a hope that a better future can be made for both Israelis and Palestinians, a future in which both the violence of the occupier and the resulting violent resistance of the occupied come to an end, and where one people need not rule over another, engendering suffering, humiliation, and retaliation. True peace must be anchored in justice and an unwavering commitment to universal rights for all humans, regardless of ethnicity, religion, gender, national origin or any other identity attribute. – Archbishop Desmond Tutu”